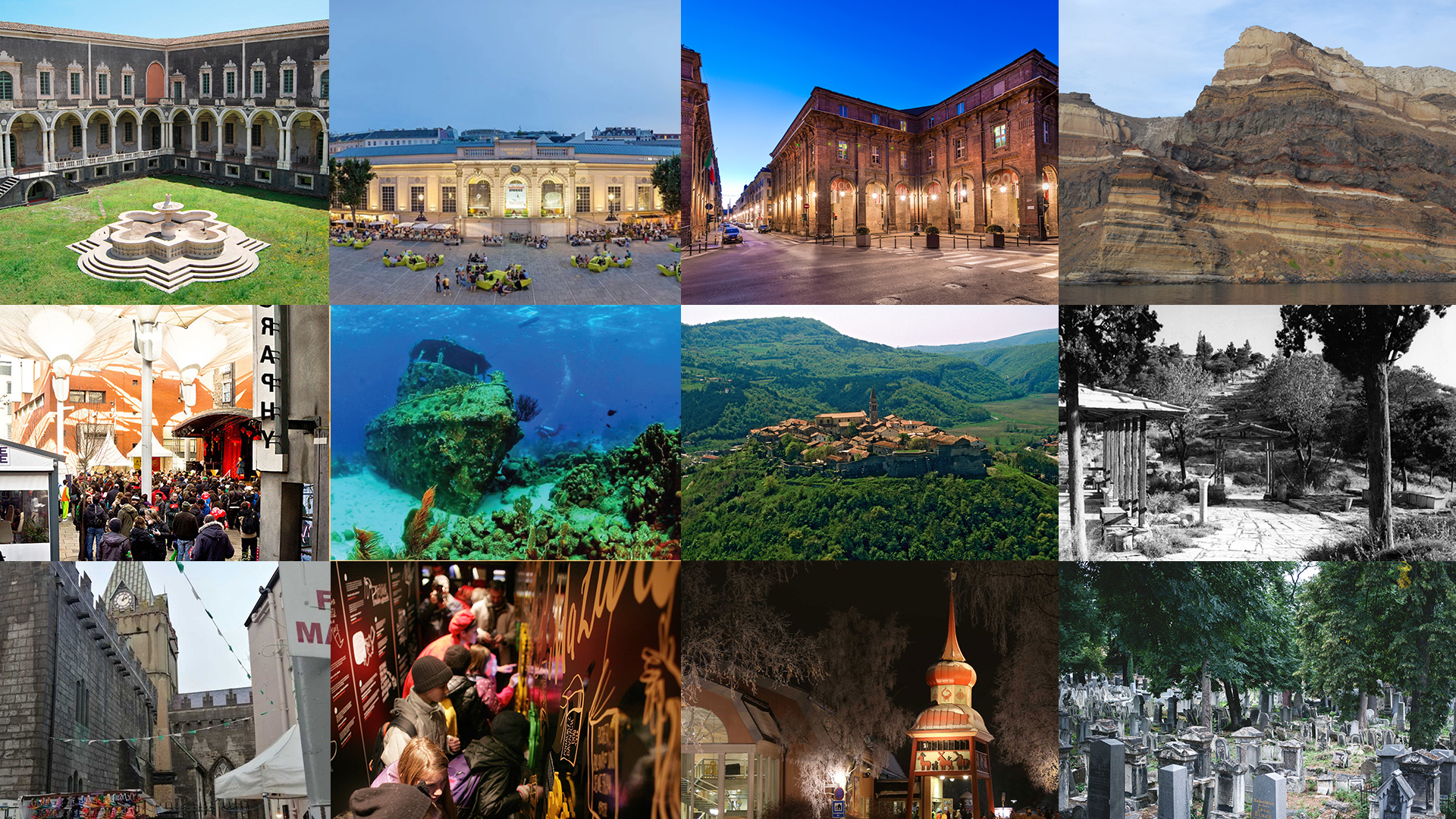 After reviewing and analysing the literature, policies and models related to cultural heritage impact assessment and consulting stakeholders during the Athens Virtual Workshop in the summer 2020, SoPHIA designed a draft holistic impact assessment model that is being currently tested across Europe. The results will be presented at the Vienna Conference and further discussed with SoPHIA´s community of practice, fine-tuning the model and bridging thus the gap between the academic research and the professional practice on cultural heritage.

The 12 case studies represent a variety of types of cultural heritage, comprising a landscape site, two museums, two programmes, three cultural districts, a place of remembrance, a historic city centre, an island and a monastery:

Officine Culturali is a small nonprofit association of young professionals engaged in the enhancement of a relevant cultural site: the Benedictine Monastery of Catania. The Benedictine Monastery is one of the biggest monasteries in Europe and one of the UNESCO Heritage sites. The cultural relevance of this 17th century monastery has been neglected for years, resulting in a small number of visitors, no tourists, no sense of place and consideration by the youngsters. Nevertheless, in 2013 The University of Catania entrusted Officine Culturali the task of managing the site as a place to be known, visited, and enjoyed. Thanks to those young, passionate, and competent people, the site is now visited by tourist, families, students, and, despite the poor socio-economic context, the inhabitants of the neighborhood.

Temple Bar is a 28-acre urban quarter in Dublin city centre. The area was strategically regenerated as a cultural quarter during the 1990’s by Temple Bar Properties Ltd. through property purchase, renewal and management of fixed rents. The moneys generated from rental income were invested back into the property renewal programme and environmental action and used to subsidise cultural projects. The management and stewardship of the cultural quarter has gone through a number of phases. The heritage of the site dates back to the Vikings and includes sections of the walls of the medieval city. There are increased pressures on the area from over tourism and commercialisation. Tensions remain between building an authentic and sustainable sense of place for the people of Dublin and the development of a contrasting branding of place to attract tourists. Today the area hosts 14 nationally significant cultural buildings such as Project Arts Centre or the Ark Cultural Centre for Children.

Galway City, located on the west coast of Ireland was designated European Capital of Culture 2020. Galway has a vibrant contemporary culture from Druid theatre to Macnus Street Spectacle to Galway International Arts Festival to Galway Film Festival. Cultural engagement and participation from live music to arts festivals is high. The contemporary culture is embedded in the cultural heritage through tangible sites and intangible practices connected to rural surroundings and coastal landscape, which has created a distinct sense of place, and meaning for a city. Heritage features large in the programme of Galway ECoC 2020. For example, John Gerrard’s Mirror Pavilion is a sculptural installation that displayed a digital artwork entitled Corn Work. The work recalls histories of grain milling as well as folk tradition of Straw Boys. The project Sea Tamagotchi: Foclóir Farraige has brought to life the vocabulary, stories and place names of the Irish language associated with the sea along the Irish coast of the Atlantic.

The Museumsquartier Vienna is a district of contemporary arts and culture in the heart of Vienna. On 90,000m2 it encompasses 60 cultural institutions, renowned museums such as the Museum of Modern Art and the Leopold Museum, as well as a museum and theatre for children and many other institutions and independent cultural initiatives. The Museumsquartier is located at the former old imperial stables and thereby attempts to connect historic architecture with contemporary design. The planning for the MQ already started in the 1970ies. The opening of this urban project took place in 2001. It changed the city’s life in social, economic, ecological, and cultural terms. For the development of the SoPHIA impact assessment model it thereby represents an opportunity to test the model on a case in a very urban area that encompasses interventions in cultural heritage related to the architecture, historic buildings and museums.

BLUEMED is a European project that aims to the protection and valorization of the underwater natural and cultural heritage. In particular, it organizes accessible underwater archaeological sites (AUAS) and establishes coastal Knowledge Awareness Centres nearby, while ensuring at the same time the protection of the environment and biodiversity of the Mediterranean. In this way, it promotes a sustainable and responsible model for the development of diving tourism. The project involves fourteen partners from five countries and fosters new models of public/private partnerships at European, national and regional level. Its interest resides in the combination of the cultural / environmental aspect, valorized by technological innovations and taking into account the economic perspective. The Interreg-Mediterranean project is co-funded by the European Regional Development Fund and its total budget is 2.8 million euros.

Ivana´s House of Fairy Tales is a public multimedia and interdisciplinary visitor’s center founded by the local authorities in 2013 and based on their strategy of developing Ogulin as a unique and specific cultural tourism destination in the continental part of Croatia, whose identity and brand is built around fairy tales. This idea was inspired by the fact that Ivana Brlić-Mažuranić, Croatia's foremost writer of fairy tales, was born in Ogulin and drew her inspiration from the local customs. The document ‘Strategic Development Plan of the Visitor’s Center for the 2014 to 2020 period’ sets the development of a cultural and tourist infrastructure based on local intangible cultural heritage as the primary goal of the project. The theming of the landscape of Ogulin with the “Fairy Tale Route” enriches its sense of place that is greatly important for Ogulin residents and visitors, strengthens Ogulin’s identity and positions it on the tourist and cultural map of Croatia and Europe as a desirable experience destination.

Polo del 900 is a non-profit Foundation that brings together 22 historical, cultural, and social institutions dealing with the history of the 20th century, promoted by the municipal administration, the region, and an important bank foundation: Compagnia di San Paolo. The current headquarters of the Polo is a former Military Quarters built between 1718 and 1728 and restored in the late 90s. The institutions are hosted in the Polo and share with the foundation their personnel (staff, management), documents, projects and activities. In less than 3 years, the Polo promoted a wide range of activities and projects, becoming a landmark of the cultural and social life in Turin.

Buzet is one of the largest, and historically most important towns in the region of Central Istria, Croatia. This area has been inhabited since prehistoric times, when there was a Histrian hillfort. In the 12th century the town was re-established and its basic urban structure has survived to this day. Today's old town of Buzet, as one of a series of fortified hillforts in Istria, with the remains of its ramparts, squares, palaces and churches, is a valuable, historic urban fabric that has preserved its architectural authenticity and continuity of life. As such, the old urban core of Buzet has the status of a protected cultural asset of the Republic of Croatia. In 2015, local authorities designed a strategic planning document for the town’s development that establishes the vision of Buzet as a modern town of satisfied people, competitive economy, attractive natural and cultural heritage, which bases its progress on traditional values and sustainable development.

The case of Nationalmuseum Jamtli is about a joint regional, national, and European investment in establishing a satellite art museum for the Swedish National Gallery. The satellite came to be located in a developing region in Northern Scandinavia in an area with a relatively small population but well known for tourists. The satellite museum is an original collaboration between a state run national museum with world renowned collections, and a regional semi-private museum which is well-known for the pedagogical offers and public popularity. The case is interesting as it is placed within the perspective of different initiatives to stimulate the large government owned institutions – predominantly located in the country’s capital Stockholm – to engage and possibly be visible in the whole country. That has been almost impossible for museums because of demands for security, and little has happened. In some respects the development has actually gone the opposite direction as security demands and costs since 2010 has even been the main factor for the national museums to offer and arrange temporary exhibitions outside Stockholm.

The insular complex of Santorini presents the case of a tourist destination ranking among the top globally, while at the same time, it is a site of unique natural beauty and geological interest. Santorini features the only volcanic crater which is accessible by sea; it is the most modern land globally, as its last volcanic island emerged in 1950; Santorini has the oldest vineyard on earth, which has given its grapes and wine over the centuries without disruption. Santorini’s art of winemaking is in the process of becoming a candidate of the UNESCO list of intangible heritage (cultural intervention ex-ante). There are also thoughts of initiating this process for the “Caldera” (the wall of the volcano), archaeological sites and medieval castles.

Filopappou Hill lies next to the Acropolis and forms a natural and cultural landmark for the city of Athens. It consists of three distinct bodies including the Hill of the Muses, the Hill of the Nymphs, and the Pnyx, the latter known as the birthplace of the ancestor of what is modern day democracy. Known also for the much-appreciated contemporary landscape interventions, pathways, and resting areas, assemblages of antique marble, debris from the demolitions of neoclassical buildings and cement by architect Dimitris Pikionis.  As a lung of oxygen and a swath of nature with rich biodiversity in an otherwise densely built city, it was pronounced by the Council (2015) an archaeological site and a public place of recreation, and "well-being", for exercising sports and reflecting upon history and beauty. The challenge today is the management of the diverse cultural heritage with different needs of openness and protection, and the production of a contemporary narrative and vision for the future of the Hill as an integral part of the history, the environment and society of Athens.

The Jewish Cemetery in Währing, the 18th district of Vienna was the main Jewish burial Vienna from 1784, when it was established, until 1897 when the Jewish section at the Vienna Central Cemetery was completed. The cemetery was partly destroyed during the Nazi era. But even after it was restored to the Jewish community after the war, a portion of the cemetery was required to be donated to the municipality of Vienna. Since 2010 civil society initiatives are taking steps to restore the cemetery and make it accessible. In the long term the association coordinating the restoration and the Jewish Community Vienna also aim at the establishment of a museum at the site. Only in 2020 the republic of Austria decided to support the restoration with funding for the next three years. For SoPHIA the case study represents a civil society driven case of intervention at a historically critical site of remembrance.

We are especially grateful to the stakeholders involved in these 12 study cases for their generosity in providing partners relevant material and in engaging in interviews and discussions. Their support has been extremely valuable for the SoPHIA project to advance on knowledge and practice towards a holistic Cultural Heritage Impact Assessment model.

Credits of the pictures are from top to bottom and left to right:

The courtyard of Loumbardiaris Church on Filopappou Hill and the surrounding paths and environment, © Dimitris Pikionis A.M.K.E.