New round of consultations with stakeholders in Catalonia, Athens and Santorini 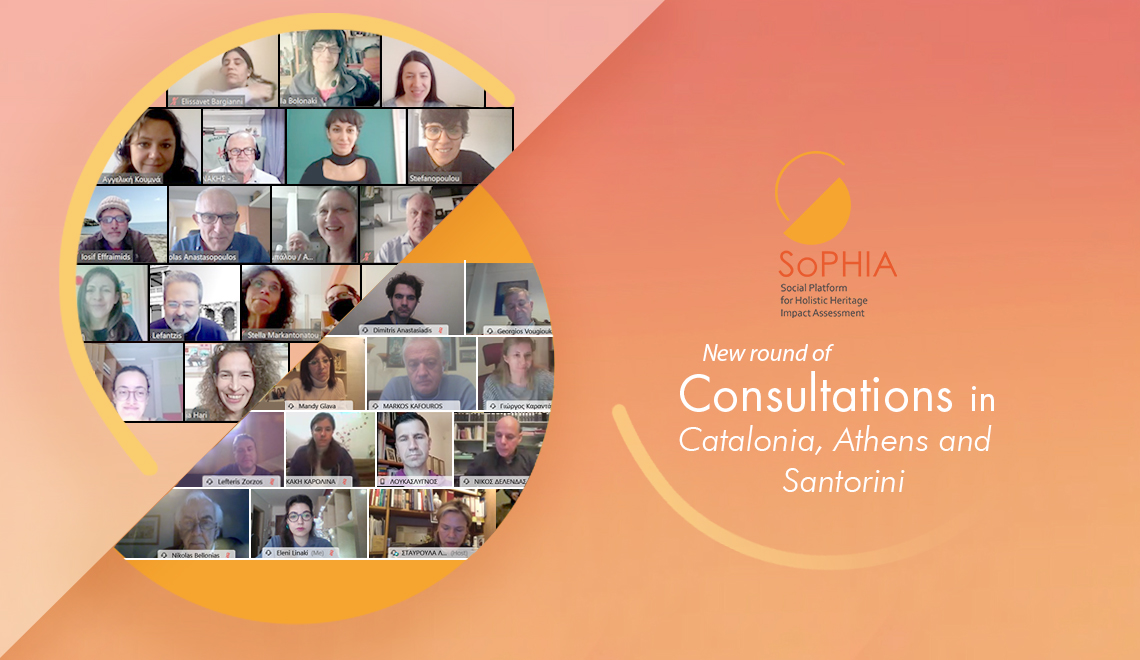 The partners of the SoPHIA project are carrying out consultations with stakeholders in their home countries. On 15 January, 2021, Interarts organised a meeting with experts in Catalonia; on January 16, the National Technical University of Athens (NTUA) in Santorini and, on 6 February, in Athens. The aims of the consultations are diverse, depending on the location. Whereas Interarts collected inputs mainly from heritage sites’ and museum managers on the methodology and content of the draft impact assessment model developed by SoPHIA, NTUA convened key stakeholders of the island of Santorini and the Filopappou Hill, two of the case studies where the draft model is currently being tested albeit from an ex-ante perspective. The stakeholders were experts from the Greek Ministry of Culture, the academy and cultural, environmental and commercial organisations, among others.

In Catalonia, the exchange tackled the transversality of the model, its links to the 2030 Agenda for Sustainable Development or the need that the methodologies to collect and assess data be targeted to a specific cultural context. Also, other ideas were put forward: the need that everyone understands what heritage means, under “Knowledge”, or the imperative need to include the subtheme of digitalization; under “Prosperity”, indicators that assess new habits of cultural consumption could be taken up, and the subtheme real estate value could allow understanding to what extent cultural heritage sites, practices or programmes contribute to, for instance, the phenomenon of gentrification; under “Well-being / Quality of Life”, the link between heritage and peace and security, fostering a reflection on how the collections and other types of cultural heritage could offer in this regard, was addressed; access, under “Social Capital”, should be understood in its broadest sense, considering issues that are frequently silenced such as religion and gender; “Innovation” should go beyond an economic approach and also tackle education, through active participation for citizenship and the enhancement of knowledge.

As regards the case study in Santorini, its ‘community of inheritance’ was mapped and addressed: a number of local citizens’ movements, institutions, municipal agencies, institutes and associations were brought together, as well as the ministries, ephorates and the church, especially where museums, archaeological sites, and landmark sites are concerned. During the consultations two cases were analysed: winemaking as an expression of intangible cultural heritage and the volcanic landscapes (“caldera”) with their medieval castles. Both are bidding for inclusion in the UNESCO Heritage. Santorini is one of the world’s top tourist destinations, but it is also a unique site for its natural and geological interest. In fact, Santorini features the only volcanic crater which is accessible by sea and is also the most recent to surface, since it emerged in 1950; it also has the world’s most ancient vineyards that have produced grapes and wine over the centuries without disruption.

Lastly, for Filopappou Hill the FH2031 focus group was organized. For the first time, stakeholders were brough together and this was much appreciated by all the participants. The purpose was to gather information and to identify the strong and weak points of the site interventions. This was an incredible opportunity for a shared understanding of the situation and to envisage jointly a possible scenario for the future with an ideal deadline set for the year 2031.

The inputs from stakeholders will be taken on board by the consortium in the further implementation of the SoPHIA project and we thank them all for their active engagement in the Social Platform.