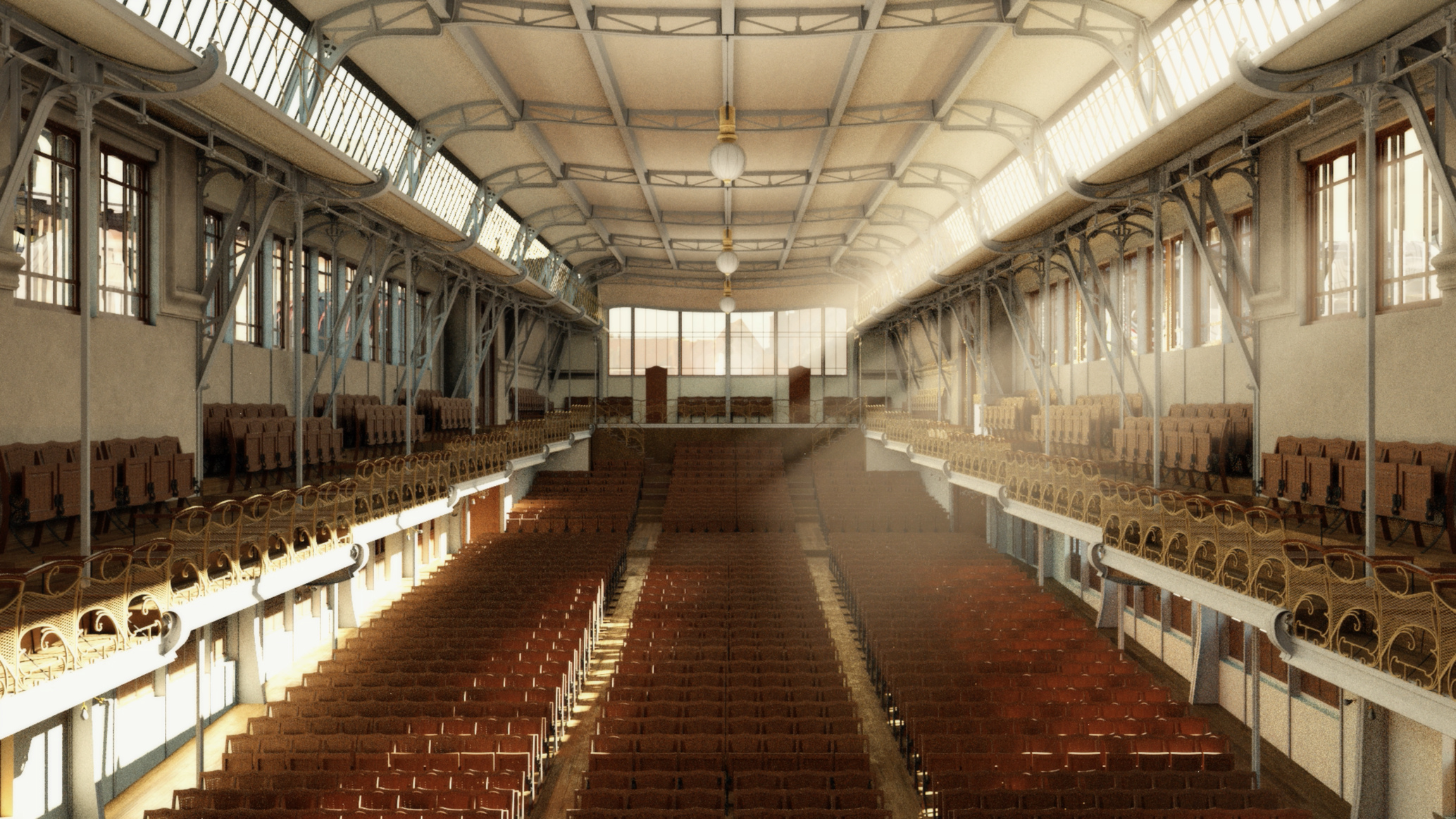 SoPHIA conducted an interview with Benjamin Zurstrassen, curator at Horta Museum in Brussels, where the 3D reconstruction of Maison du Peuple has just been nominated for the Heritage-led Innovation project of the ILUCIDARE Special Prizes in its 2021 edition.

The 9 shortlisted projects of the ILUCIDARE Special Prizes, awarded within the European Heritage Awards / Europa Nostra Awards, were presented last June. The projects are compelling demonstrations of heritage-led innovation and international relations. Although the areas and range of their activities are diverse, they all show how heritage has the potential to create meaningful links across countries and communities and to develop exciting new solutions and spur social change.

From 2015 to 2019, the Horta Museum, located in Victor Horta’s UNESCO World Heritage former house and studio in Brussels, nurtured a fruitful educational collaboration with Laboratoire Alice (Laboratoire d’Informatique pour la Conception et l’Image en Architecture) at the La Cambre-Horta Faculty of Architecture of the Université Libre de Bruxelles, which led to the creation of a partial 3D reconstruction of the Maison du Peuple, one of the most influential Art Nouveau buildings in Belgium and a most notable design of Belgian architect Victor Horta, which was sadly demolished in 1965.

This ambitious project was developed by a multidisciplinary group, including architects and architecture students, restorers, curators, editors, a photogrammetric survey specialist and a composer-pianist. It was realised with funding from the Baillet Latour Fund and Université Libre de Bruxelles. The Jury in particular praised the project’s innovative approach towards an accessible database: “The partial 3D reconstruction of the Maison du Peuple portrays an interesting use of technology to understand Horta’s vision, contemporary building techniques and architectural values. The project has a rich network and the database is supported by accurate research, which can easily be browsed and understood by a variety of audiences, from specialists to enthusiasts or curious people.”

Could you please introduce yourself and then your relation to the project and to cultural heritage?
Benjamin Zurstrassen: I am curator at Horta Museum, studied history as bachelor and art history for my master studies. I started working at Horta Museum in 2014. Horta Museum is a museum with exhibitions and workshops for children but it is also a research center, with a library, archive, plans, drawings, etc. It has big library and in the archive there was a sleepy treasure with all the plans and drawings made by the architect Richard Pringiers in 1911. Pringiers made an extension  and planned the genuine Maison du Peuple. In 1939 all the plan yards were destroyed, including the one of the Maison du Peuple. Only few documents could be saved.

However, it was very interesting and rich information because it allowed us to have plans, details, things that we didn’t have before about the structure. It is also very important to mention the Alice Laboratory at the Faculty of Architecture of La Cambre-Horta, with the purpose to train students on how to make 3D architectural models. I was impressed and thought that we should work together. La Maison du Peuple has huge dimensions. We decided I 2015 to go with one room with details of one staircase for one student within a master thesis. This allowed us to train a student and to make them be more aware of heritage in Horta. But it was also risky because if one of the work was not good enough, we had to remake it. In 2019 because of the funding from Baillet Latour and Universite Libre de Bruxelles, we had the money to check the work developed by each student and to complete the project. The result was a movie and an interactive version, both of them open to the public.

I´d like to understand because the building doesn't exist anymore. How is it any different from a virtual tour?
In 1965, the building was destroyed in spite of strikes, demonstrations, petitions, etc. A bit of funds could be collected to save some bits. The destruction is still something which makes people in Brussels suffer. Citizens began to fight against destruction of heritage because in Brussels there is something called Brusselization, which means destruction of buildings in order to build new things. There's a video also with information on the destruction, the explanation is there, as well as for the details. That's the most important thing about how it has been reconstructed and all about the 3D model. Because the important thing for us was to lighten the public, to provide them information and to make them aware of the fact that this is a proposition of restitution.

Congratulations on the work. The project is now over. It also got shortlisted under the ILUCIDARE Special Prizes. How are you using this?
It's a big challenge for us to develop the project, because even if it's already quite convincing, there are many new things and research still to be done. We can always go further. We would love to find someone who can do a thesis on that and to do the 3D restitution of many more rooms inside the Maison du Peuple. The rooms that are available now are the most famous ones. We would like also to go deeper into the research. So we see the project in progress and the fact that the Prize could give us more visibility would convince more people to support the project and to make it even more ambitious. This is a way to reach even more people.

What is it about innovation that makes it important for cultural heritage? What are the obstacles and benefits?
I have already said a little about the fact that the project is very realistic and convincing. But this is also a creation, so we never stress that enough. I think the big risk is if this approach would replace the real experience. For example, at our Horta Museum an exercise is to convince people to come inside and join the physical meeting and feel the play of light and shadow, the cubes, the colors, etc. I think we should fight for that because it's an irreplaceable part of the narration. Elements should be felt and shouldn't be seen only through a screen. I've seen some 3D restitution of something which already exists, I don't really understand that. In some cases, 3D works are quite useful for scientific research in order to have an idea on how the site looked at a certain moment. It must be said, however, than a very good photograph is far better than any 3D restitution. We should be aware and cautious on that and not spending money, time and resources into things which are just gadget. From my point of view, the case of the Maison du Peuple makes sense because it is something which was destroyed.

I'm just curious because, you mentioned the initiative of the Alice Laboratory at the university when this project came into existence. Were there other examples that inspired you?
Indeed, I was always inspired by the work of the Alice Laboratory. Some works made by students were really interesting and rich. I was inspired at the same time by things that I didn't like. So, I also knew what I wanted to prevent.

I shared brief information about our SoPHIA model, which aims at contributing to the reflection on impact assessment and quality of interventions in European historic environment and cultural heritage, considering the social, cultural, economic, and environmental domains, as well as the time as longitudinal perspective and the people axis. Do you think such a model is needed?
Definitely, because it's somehow a new field and sharing experiences and having some guidelines on the topic at hand are always important, as well as its dissemination among the ones engaged with cultural heritage.

What do you think about the gap in innovation related to cultural heritage?
We at the museum have always been working in many ways to remind people how important craftsmanship is, the real experience, for example, with children. Handwork is important in cultural heritage. There are many reasons, for instance, why smartphones are forbidden inside the museum, but one of them is that we want people to look at things and to make them learn how to look at it. For a museum, technology should be used when necessary, avoiding converting them in a Disney experience. Technology in these cases should be related to research and knowledge. We had to involve specialists and people in charge, architects, engineers, etc. on the 3D model. We made major discoveries. Actually, I'm not sure we would have been able to find those things out without technology and without research. The result of this project is research available for free on the web and not just something for people who pay the ticket. Sharing our heritage as much as possible is part of our duty.

Would you like to add anything else, something that should be mentioned?
I very much appreciate the somehow holistic nature of the project, in connection with new technologies, engineers, art historians and architects. The knowledge of the building evolves. The scientific part of the model is open on the website. For example, a particular column of the Maison du Peuple, which still exists today, is portrayed in 3D and the model can be accessed by clicking on it. The user can enrich the model by providing information. So, the result is not only something beautiful for the public, but the knowledge evolves with new research and new knowledge. And a last thing, we order a composer to make the music and to connect with contemporary creation. So, the project is summing up by including all these different parameters, departments and the goals of the Horta Museum.

And the knowledge and skills that are developing along with it... Thank you very much and best luck with the prize for this outstanding practice.