Report on the SoPHIA Final Conference 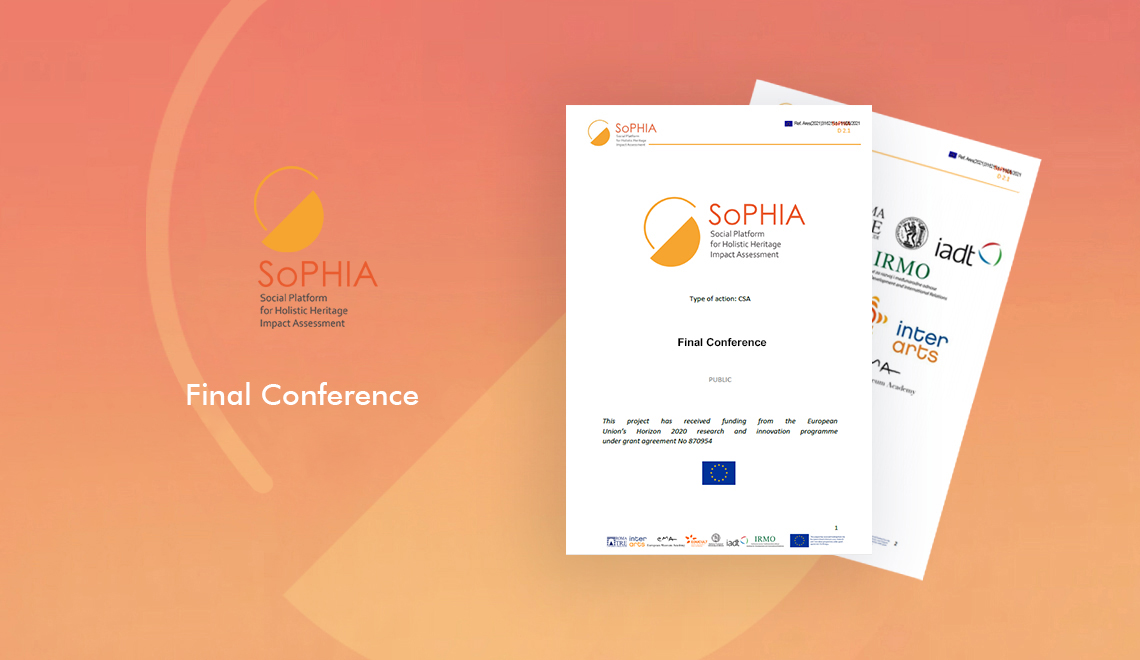 SoPHIA Final Conference was hosted in a hybrid format broadcasted from Roma Tre University on December 16th and 17th, 2021. It gathered over 60 participants, 37 onsite and 30 online, (including partners from the Consortium, Advisory Board members, stakeholders from the SoPHIA Social Platform, practitioners and policymakers) to discuss the results produced by the project.

One the first day (December 16th), two keynote speeches addressed the new scenarios for cultural heritage. First, Erminia Sciacchitano (Officer of the Minister´s Cabinet of the Italian Ministry of Culture, and Advisory Board Member of the SoPHIA project) gave a presentation on the importance of adopting a holistic approach to address climate change and to recognize the role of culture and heritage in achieving a climate resilient world. Then, Alessandro Rancati (European Commission’s Science Service and Design for policy at the New European Bauhaus) explained the innovative features of the New European Bauhaus and how this initiative can contribute to connecting experts with different background to design a new way of living.

On the second day of the conference (December 17th), after the official openings, Honorable Silvia Costa (formal member of the European Parliament) proposed to the Consortium to reflect together on a possible implementation of the SoPHIA model for assessing the restoration and valorization project of the ancient Saint Stephen Prison in Italy. Her proposal paved the way to discuss the future deployment of the SoPHIA project’s outcomes, that were presented and commented in panel sessions, namely: a) SoPHIA model and its potential for future deployment, b) recommendations on policies, action and research on CH impact assessment, and c) prospects for Holistic CH Impact Assessment beyond SoPHIA project. Each session included a presentation from invited guests, followed by open discussions that benefitted by the diverse audience gathered for the conference, proving (once again) that the interdisciplinary approach proposed by SoPHIA is a key element in addressing the CH field.

The outcomes of the Final Conference played a crucial role for finalizing the project’s deliverables and for launching future joint initiatives and research opportunities. In fact, although it represented the formal conclusion of the SoPHIA project, the Final Conference also marked the starting point for the SoPHIA model implementation phase (To reed the report on the final public conference, please click here) As remarked throughout the conference, it is now essential to raise consensus on the effectiveness and applicability of the SoPHIA model as recommended tool for CH impact assessment. In order to do this, a twofold process should be implemented. On the one hand, the SoPHIA model should gain legitimacy at the European level and should be promoted by the European Commission with a top-down approach; at the same time, a bottom-up process should be implemented to engage all cultural organizations, and association that may be interested in using the model.

Although promoting and disseminating the SoPHIA model is not a simple task, the Consortium may count on the Community of Practices created in the last two years. The fruitful discussion held during the Conference proved not only the engagement and awareness of this Community towards the topics related to CH impact assessment, but also their willingness to play an active role in the implementation of the SoPHIA outcomes.